Strong demand and unexpected increases in dealer restocking led to a 14% increase in sales and revenue in the first quarter of 2022 for Caterpillar.

The company reported sales and revenue of $13.6 billion for the first quarter of 2022, compared to $11.9 billion for the same period of 2021. This is the fifth consecutive quarter of increased end-user demand. compared to the previous year. Sales increased in all of Cat’s major segments (Construction Industries, Resource Industries, and Power & Transportation) due to volume gains and favorable pricing.

“We continue to be encouraged by strong order demand in our segments in the first quarter of 2022,” said Jim Umpleby, Caterpillar president and CEO.

The unexpected increase in sales came as dealers increased inventory by about $1.3 billion, nearly double what Cat had expected and about $600 million more than in the first quarter. of 2021. Dealer inventories would have remained relatively flat in 2021 after declining $2.9 billion in 2020.

“About half of this $600 million year-over-year increase comes from primary industries due to the timing of shipments from dealers to their customers, which can be erratic,” said Andrew Bonfield, Caterpillar’s chief financial officer. “These units are supported by firm customer orders that were not reflected in our reported retail sales for the quarter.” He said this was partly due to variations in on-site assembly times. The CFO said the remaining half of the increase in field inventory was primarily due to the timing of construction industry shipments at the end of the quarter.

“We expect dealers to begin selling inventory in the second quarter, following their normal seasonal pattern and strong user sales,” Bonfield said, noting that Cat’s full-year expectations have not changed and that the company does not expect to see a significant benefit from dealer restocking in 2022 as end-user demand remains strong.

“While dealer inventory remained near the low end of the typical range, we continue to work closely with them to meet higher end-user demand,” Umpleby added.

According to the report, Cat’s total backlog increased by $3.4 billion as the company experienced continued strong demand and supply chain issues.

“The environment continues to be challenging due to supply chain constraints and more recent COVID 19-related shutdowns in China,” Umpleby said. “Although manufacturing costs are expected to remain high, we expect prices to more than offset these cost increases for the full year.”

He praised the performance of the global team in achieving double-digit sales growth despite supply chain challenges. Umpleby acknowledged that revenue would have been stronger without supply chain constraints, which were like those highlighted in the fourth quarter 2021 report.

“We continue to run into constraints with semiconductors and some other components,” Umpleby said. “Our team continues to implement solutions to help mitigate the overall situation.” Cat executed engineering redesigns to provide customers with alternative options and increased dual component sourcing and placed specialist Caterpillar resources and suppliers to help ease the constraints.

“As supply chain conditions ease, we expect to be well positioned to fully meet demand and gain operating leverage through higher volume. Overall, we remain encouraged by the strong demand for our products and services, and we remain focused on supporting our customers and executing our long-term profitable growth strategy.

In the construction sectors in particular, Andrew Bonfield, Cat’s chief financial officer, said sales rose 12% in the first quarter to $6.1 billion, largely due to federal price realization and high sales volumes. End-user demand improved in three of the four regions. He said the segment’s first-quarter profit rose 1% from a year earlier to $1.1 billion.

According to the report, the North America region saw the strongest growth in sales and dollar sales with an increase of 28% as non-residential demand improved and residential construction remained strong. “Despite rising interest rates, infrastructure investment is expected to improve through late 2022 and beyond, supported by the U.S. Infrastructure Investment and Jobs Act,” Umpleby said. .

The first quarter report said sales in Latin America increased 60% as overall construction and mining activities supported higher demand. However, further growth could be affected by inflation and interest rate decisions later in 2022.

“In Europe, Africa and the Middle East (EAME), despite broader geopolitical concerns, we remain cautiously optimistic as housing growth in the EU investment program is expected to drive construction demand. “, said Umpleby. In this region, sales would have increased by 18%, mainly due to the demand for residential construction.

Through the Caterpillar Foundation, the company has donated more than $1 million to meet the urgent and long-term needs of the humanitarian crisis in Ukraine. Cat has suspended operations at its Russian manufacturing plants.

Conversely, with reduced sales in China, Cat Asia Pacific sales were down 21%. The 10+ ton excavator market in China has been strong in 2020 and 2021. Umpleby said he expects the market to be slightly below 2019 levels, while the rest of the Asia- Pacific is expected to grow due to higher infrastructure spending. 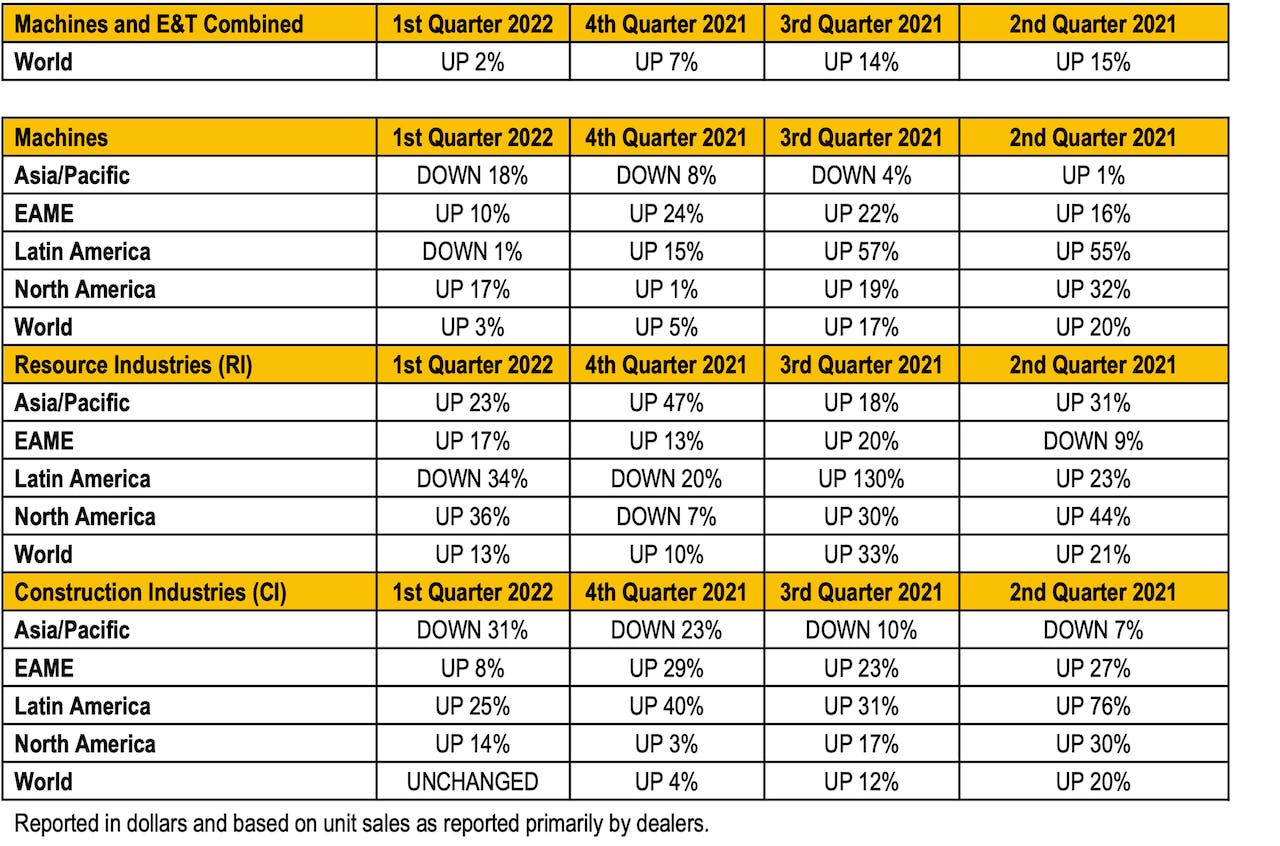 “We expected comparisons to be difficult as the inflationary impact on manufacturing costs accelerated in the second half of 2021 and remains at a similar level in the first quarter of 2022,” Umpleby said.

Bonfield noted that Cat isn’t anticipating a typical year on the margins in 2022.

“In a normal year, we would see strong margins in the first quarter with margins declining sequentially through the fourth quarter,” he said. “This year, we expect margins to improve in the second half compared to the first half and the comparable period of 2021, as the impact of equities on prices accelerates.”

Overall, price increases should continue to offset manufacturing costs throughout the year, with margins close to or above 2021 in the construction industry segment. 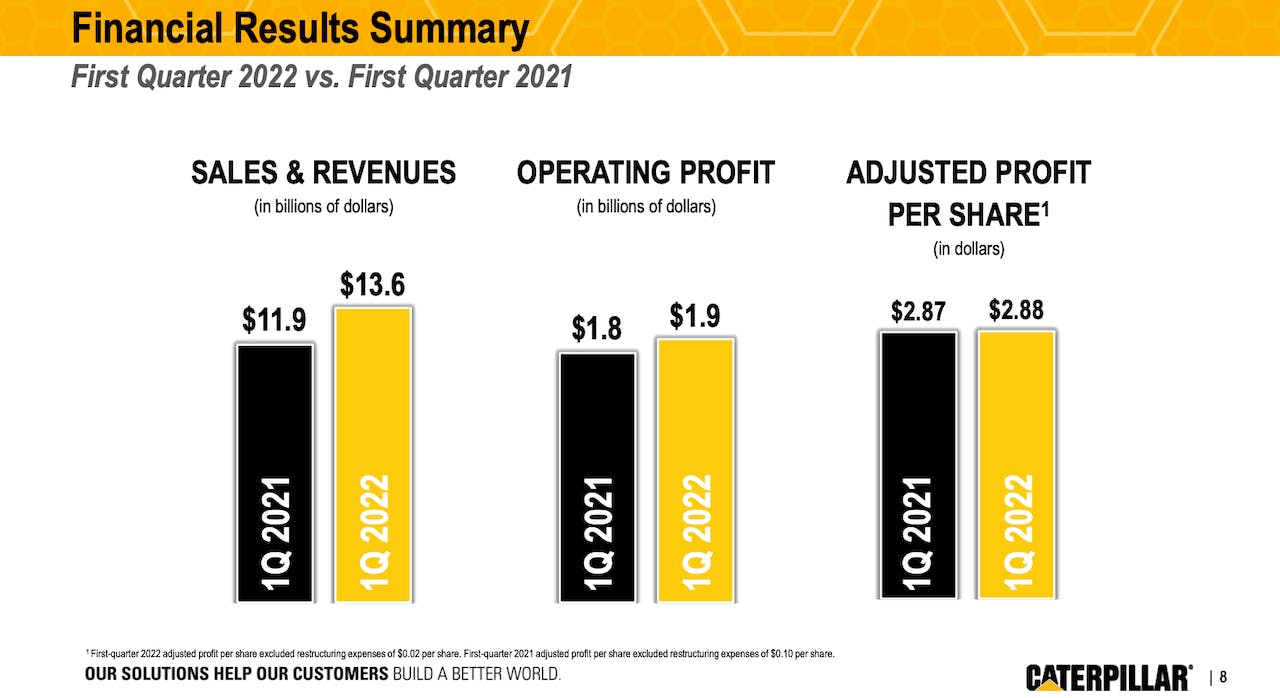 Cat Financial reports that during the first quarter of 2022, retail new business volume was $2.78 billion, a decrease of $30 million, or 1%, from the first quarter of 2021. The decline was mainly due to lower volume in Asia/Pacific and in Europe, Africa and Middle East partially offset by increases in North America and Latin America.

“The Cat Financial team continues to be focused on executing our strategy and supporting our customers with financial services solutions,” said Dave Walton, president of Cat Financial. “Thanks to the good health of our portfolio, we continue to post solid operational results.”